Journey to the world’s most valuable car brand

Toyota has persistently fought against counterfeit products and trademark infringements, with particularly good results on the Finnish market. Close cooperation with the Customs and IP partner Kolster keep product counterfeiters and reputation free-riders at bay.

Toyota’s and Kolster’s joint car ride began in 1966 when Kolster registered the TOYOTA® trademark in Finland. In the same year the company launched it best selling car model of all time, the Toyota Corolla. It has earned its place in the history books as the car that motorized the world and helped Toyota gain the market leader position both in Finland and worldwide.

The flip side of the popularity is that Toyota has become a more and more interesting target for product counterfeiters. Companies and online shops have appeared on the market, which unlawfully seek to benefit from the Toyota brand and get financial advantage alongside a popular car brand.

“Thanks to Kolster, we have managed to root out counterfeit spare parts and accessories, which involve a security risk, from the Finnish market, and effectively prohibit unauthorized use of our logo,” says Project Manager Arto Toivonen from Toyota Auto Finland’s service management and after-sales team, summarizing the results of the long cooperation.

Arto Toivonen is one of the pioneers of anti-piracy work in Finland. His work at Toyota’s spare parts, accessories and service management team will be inherited by Senior Manager Jyrki Mäkelä as Arto retires at the beginning of next year.

“Counterfeit products and infringements of our trademark will probably never end altogether, so the fight will go on, but we are proud to have clamped down the problem more effectively in Finland than the rest of Europe. This is concretely seen also on websites where there is only little misuse of the Toyota logo, due to our active involvement,” says Jyrki Mäkelä. 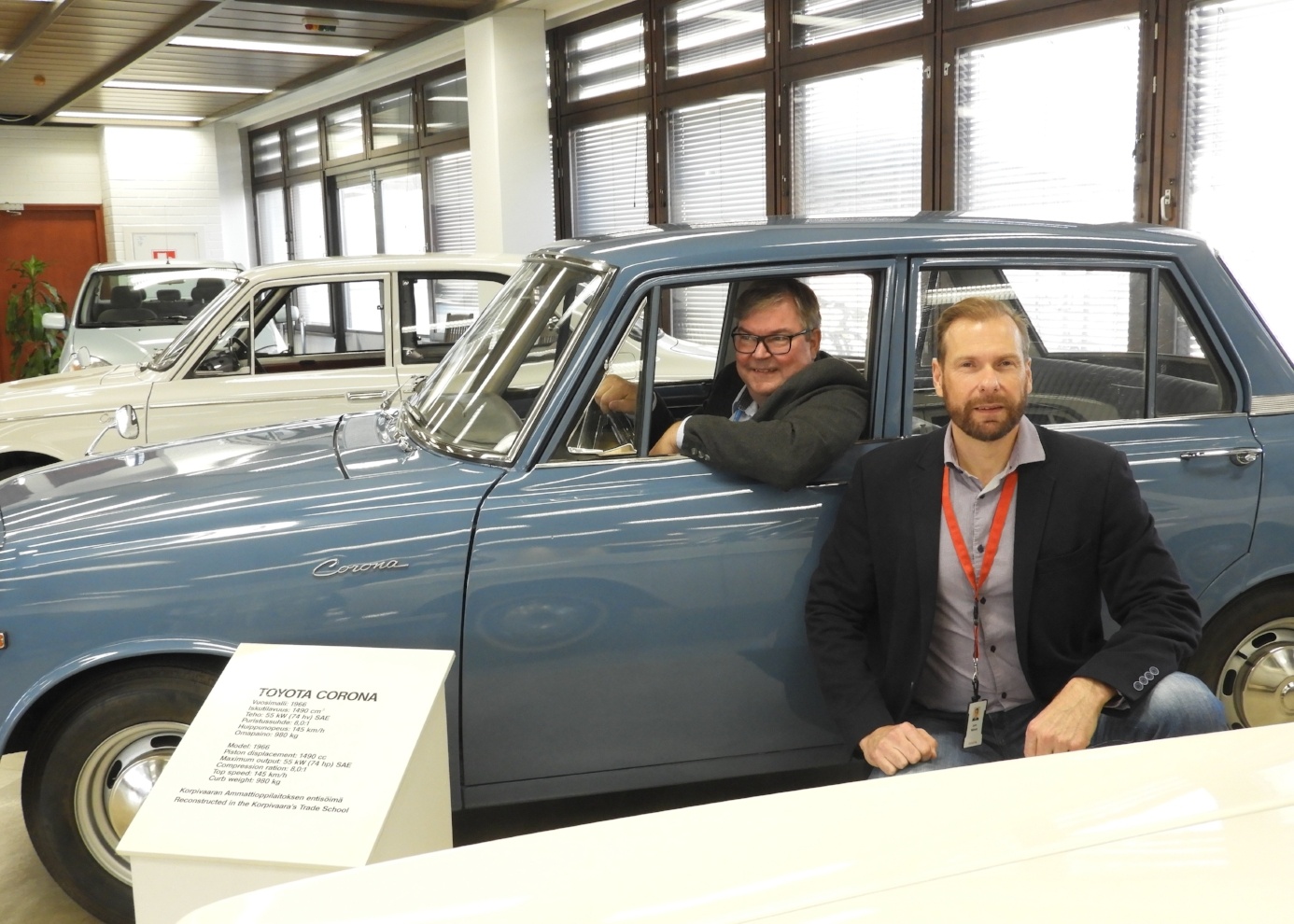 Toyota Corona of the year model 1966. In the same year, the company’s all-time most popular model, the Toyota Corolla was introduced, and Kolster registered the TOYOTA® trademark in Finland, which started the cooperation lasting through decades.

“We tackle all infringements with zero tolerance”

Toyota introduced an intensified protection program of its trademark in 2008. The cornerstone of the program is a zero tolerance on all counterfeit products, copyright infringements, misleading signs, and unauthorized use of the logo. This has also intensified the cooperation between Toyota and Kolster.

According to Arto Toivonen, out of all the Finnish car importers it is Toyota that has the best and most active network for market monitoring in Finland and, supported by the Group, also the best resources to tackle infringements.

“Each month, we send a report to Kolster on the infringements that the Customs, our retail or servicing network, or our Group level partner for global network monitoring has found on the market. Then, Kolster’s IP lawyers carry out the required further clarifications and contact the infringing parties,” Ari Toivonen describes the effective cooperation on several fronts.

“Conciliatory path has been effective”

Most of the infringements of the Toyota brand, approximately 90 percent, are according to Toivonen related to misleading advertising that makes use of the logo without authorization, as well as product sales both online and in car accessory shops of many types.

“When we send a warning letter, the unauthorized use of the logo is usually solved. Difficult cases, which also involve destroying physical products, take more time. However, we have so far managed to solve all the trademark infringements by taking the conciliatory path”, says Kolster's IP expert.

According to her, many small repair shops and online entrepreneurs infringe Toyota’s trademark rights partly due to ignorance, but often it is disregard for a brand property belonging to someone else.

From Toyota’s viewpoint, one of the most unpleasant cases was a car accessories shop operating in several localities and online, selling spare parts and accessories in packages imitating Toyota’s product packages.

The negotiations lasted for a long time, but supported by Kolster the issue was finally solved and the infringing operations ceased,” Arto Toivonen reminisces a case in which Toyota’s reputation was particularly insultingly used.

“Cooperation between the Customs, Toyota, and Kolster is unique

The most serious cases of infringement, so the remaining 10 percent, are low-quality counterfeit products relating to the performance and safety of the car, such as brake pads, clutch discs, or oil filters.

The car industry is actually one of the fields that suffer the most from counterfeit products and copyright infringements. As a result of the criminal operation, the car industry loses approximately EUR 9 billion a year. The European Commission estimates that up to ten percent of all the car spare parts for sale in Europe are counterfeited.

“One of our most outrageous cases of counterfeit products was a batch seized by the customs some years ago, which contained steering wheel hub airbags which were just hollow plastic shells. Keeping them off the repair shop shelves is one of our major successes in the cooperation with the Customs and Kolster,” says Arto Toivonen.

In customs control and customs seizure matters Kolster has an agreement with Toyota Motor Europe, which at the European level bears the main responsibility for the Toyota Brand Protection Program. The cooperation is European-wide, and Toyota Motor Europe, too, has been pleased with the excellent results on the Finnish market.

“We have been giving long-span training to the Customs personnel for ten years now on how to recognize counterfeit products, and Kolster’s IP support has been of great value in our joint training events. The cooperation between Toyota, Kolster, and the Customs has been exemplary and unique,” says Arto Toivonen.

“We look after the value and quality reputation of our brand”

Long-term protection of the brand has affected the fact that Toyota is nowadays the most valuable brand in the car industry.

Toyota has held the number one position of the car sector continuously for six years and increased the brand value each year. In The BrandZ Top 100 Most Valuable Global Brands survey of 2018, the brand value was estimated to be almost USD 30 billion.

By the end of 2017, Toyota had manufactured the total of 250 million cars, approximately 10 million cars annually over the past years, and the car stock in use is the largest in the world. No wonder then that there are free riders ready to exploit the brand reputation.

The market and customs monitoring continuously catch illegal accessories or spin-offs with a Toyota logo, where only the imagination of the swindlers is the limit: key chains, caps, sauna thermometers, men’s underwear, even potency pills. In the past years, the products of the Toyota Gazoo Racing rally team, in particular, have become more common as counterfeit products, and on foreign websites the exploitation is annoyingly common.

“It took 80 years by Toyota to gain its current reputation. We want to protect authorized Toyota repair shops and retailers against unfair competition and ensure that the quality image holds. In this work, Kolster is a valuable partner for us.”

Arto Toivonen (left) and Jyrki Mäkelä look after the quality reputation of the Toyota brand on the Finnish market. The photo shows the Crown, imported in 1964 for Toyota’s Finnish premiere.

Want to learn more about anti-counterfeiting and means to tackle trademark infringements?

Anti-counterfeiting: A leave to appeal granted to Supreme Court

The Supreme Court of Finland: No criminal liability for an infringement of an EU Trade Mark or a Registered Community Design