Panu Vapaavalta, an enthusiastic ice swimmer, became convinced about the benefits of the cold and came up with an idea about a health enhancing cold mist shower. The now IPR-protected Amandan® cold therapy method is ready to take an international growth leap, in which Kolster’s patent, trademark, and licensing professionals are a valued support.

“The first pitfalls for an entrepreneur relate to finding the right people around you. I’ve been lucky in this. It is of utmost importance to be able to cooperate with qualified and straightforward people who understand the challenges of small companies, in their special fields of expertise such as patents and other IPRs,” says the Managing Director and founder of Amandan Healthcare, Panu Vapaavalta.

The cooperation with Kolster started last year when the commercialisation and international expansion of the patent protection for the shower invention Vapaavalta had made started to require increasingly more attention and investments.

As an active business networker, Vapaavalta had already before this taken part in Kolster’s IPR events. Of these, it was particularly the IPR & China themed breakfast seminar and discussions with Kolster’s patent and trademark attorneys and lawyers that gave a lot of new insights to business.

“I got more IPR information from Kolster’s China seminar than from anywhere over the past years ─ and this was in the course of one breakfast. It sealed my decision to concentrate the management of my company’s patent and trademark portfolio to Kolster,” says Vapaavalta.

Vapaavalta characterises himself as a very IPR-conscious entrepreneur. When the invention was made in 2011, he did not yet have any personal experience of patenting. However, he had actively followed patenting of several companies he knew, in general. It was clear from the onset that his own invention has to be well protected, because the Amandan® cold therapy method and the related device that can be installed on any shower would be too easy a target for copycats.

“Over the years, I have studied the IP sector more to the extent that I have adequate skills at least to know when I need specialist advice, and trust my experience in choosing an IP partner”, says Vapaavalta.

“A heavenly invention and natural form of treatment”

Amandan® cold mist shower is a “heavenly” invention because it first saw daylight on a flight in a propeller plane from Rovaniemi to Kittilä. As an aviation hobbyist, Panu Vapaavalta flew into a thin fog bank, and spontaneously pushed his finger out of the plane’s ventilation window. The mist droplets quickly cooled the skin ─ in a most pleasant way.

As an ice swimmer, he already knew how efficiently the cold helps recover from sports activities, boost mental agility, provide pleasure, and reduce stress. He started to ponder how the benefits of ice swimming could be brought as a gentle cold mist to the bathrooms at homes around the year.

The invention got early-stage research and development support from the Finnish Foundation for Inventions, the Runar Bäckström foundation, ELY Centre (The Centre for Economic Development, Transport and the Environment), as well as Business Finland, and Vapaavalta had the chance to test mist cooling and a suitable device implementation in the Arctic Laboratory in Rovaniemi. He also soon found a partner for his company, Pirkko Huttunen, a docent in thermobiology, who is familiar with the clinical benefits of cold exposure.

The functioning of Amandan® cold therapy method is already evidenced by several studies and satisfied users from top athletes to rheumatics and ordinary people. The cold has a lot of health effects. Not only does it accelerate the recovery of the body but it also eases chronic pain, reduces swelling, produces pleasure hormones adding to the mental agility, balances out stress hormone levels, improves the quality of sleep, improves resistance, and activates brown fat beneficial to the human body, which in turn promotes weight management. 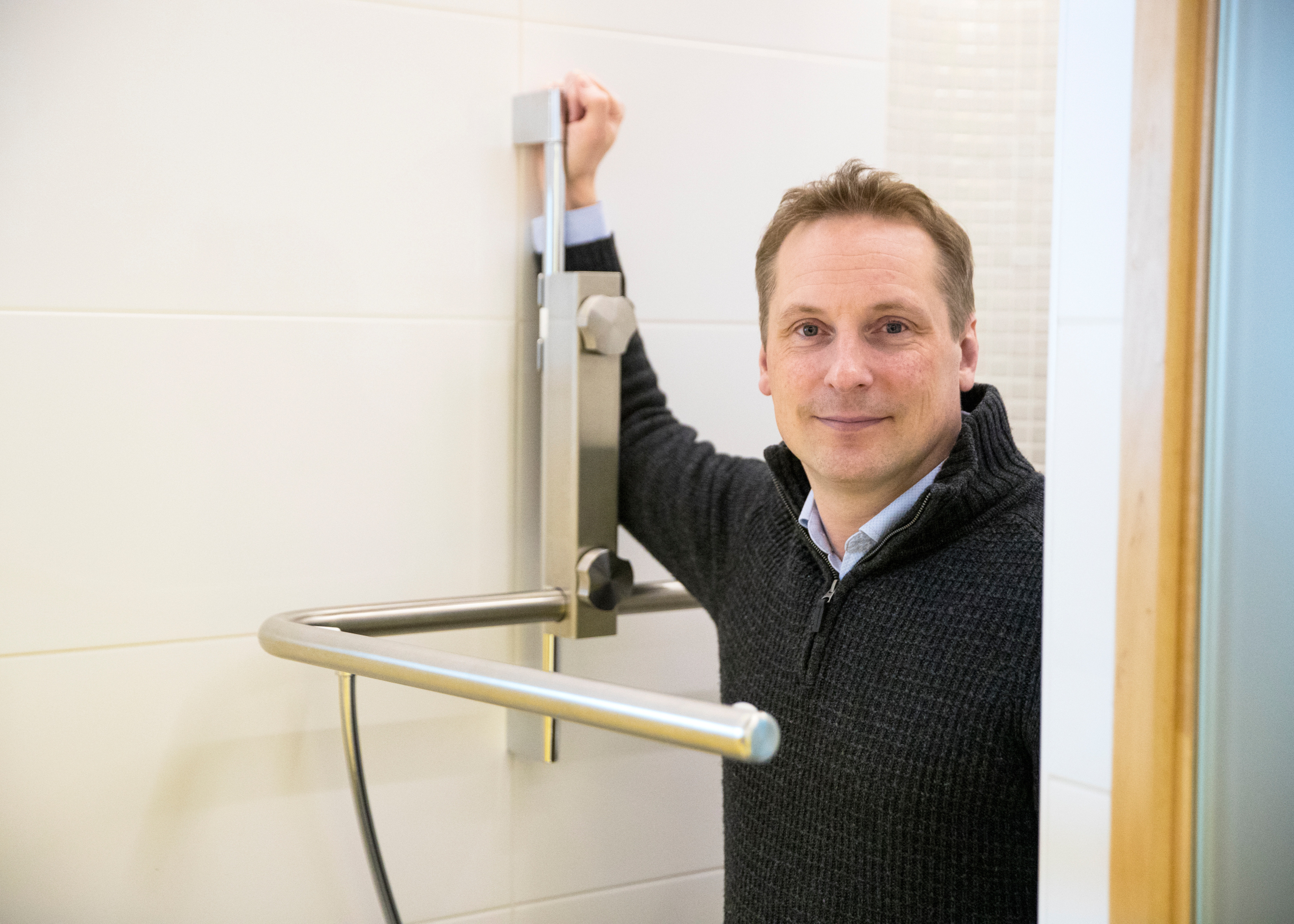 Amandan® cold shower device is easy to install on any shower, independent of the manufacturer. The device is designed sustainable both physically and ecologically: one cold therapy session uses a mere 1.4 litres of water, which is 5 % of the amount of a normal shower. “The cold is a huge resource in pain treatment without medicines,” says the developer of an easy home treatment method, Panu Vapaavalta.

“What counts in cooperation is trust, flexibility and results”

According to Vapaavalta, it is important for a small company that a good and trust-based dialog is established with the IP partner, and that the mutual goal is reached in an intelligent and practical way, by optimising costs and benefits.

In patenting, the goal is a granted patent that has as extensive as possible a scope of protection. However, surprises cannot always be avoided when extending the patent protection to new countries. The local examiners in the patent offices may have very different views of the acceptable claims and scope of a patent.

Amandan® cold mist shower has already been granted a patent in Finland, Singapore, Russia and the USA.

Kolster's patent attorney is now steering the other patent applications with determination towards the goal in the countries that the company finds important in Europe and in Asian countries such as China and South Korea.

Vapaavalta says it is of special value to a small company that a patent professional explains matters in detail as concerns, for example, patent office actions in different countries. The matters to ponder include possible limitations to the scope of protection, cost effects, and the best strategy to have a patent granted in the form that serves the company’s business operations.

“It was my feeling in the past that my patent portfolio was handled as a mushroom plantation in the dark. I felt I had no idea what was going on or what to expect. I have said that Kolster switched the light on in this mushroom plantation. I also compare an IP partner to a reliable treasurer or experienced skipper who guides a ship to a correct track, circumventing the rocks.”

“The world’s best selling cold therapy method as the vision”

The well-being sector is full of false statements and outright cheating, says Vapaavalta. That is why the company wanted to take the long product development path, make sure the device is working, and gather user experience and research data by clinical studies.

“Our first commercial products were ready in 2016, and we have from then on carried out market research based on the devices we have sold,” says Vapaavalta. 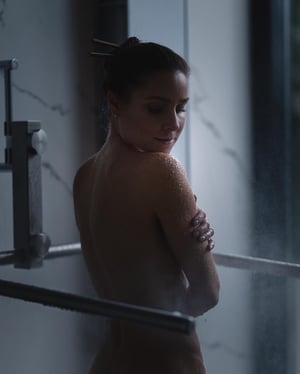 The cold mist shower already has satisfied users in the Finnish National Opera and Ballet, The Finnish Defence Forces' sports school, Lapland Air Command, fire brigades, ice hockey and football clubs such as Jokerit, Pelicans, and RoPS, and centres for wellbeing and sports, such as Santasport in Rovaniemi ─ and hundreds of private individuals.

Entrepreneur, life coach and blogger Karita Tykkä is one of the happy users of the Amandan® cold shower device. PHOTO by Emma Ronkainen from the blog by KARITA, with love.

Further, the cold therapy method is  recommended by The Finnish Rheumatism Association, doctors, as well as patients with chronical pain, and mental health rehabilitators, who have participated in the testing.

“We have already shown on the home ground that there is a demand for the product and it works. Health and well-being are global megatrends and we have a way that does not involve medicine to enhance the well-being of people. It is our vision that Amandan® is the world’s best selling cold therapy method,” says Vapaavalta.

The closest competing methods at the moment include cold basins and cryo capsules. These, however, are not easily or financially available to everyone as a regular form of therapy, and it is precisely the regularity of cold therapy that guarantees the best results according to the studies. In addition, the method is easy to scale up from home bathrooms to larger spaces by increasing the number of nozzles.

Besides, people are not the only ones benefitting from cold therapy, but the method works equally well for treating, for example, horses.

Outside Finland, the company already has references in Switzerland and Singapore, for example, but it has not wanted to set out to commercialise its class act product in large scale by itself. It is now actively seeking partners for international distribution. According to Vapaavalta, the real breakthrough to the global market will take place with a major partner.

The company is involved in ongoing preliminary licensing negotiations with a partner that has existing international sales channels. In the partnership negotiations, too, Kolster has provided great sparring and legal support.

“IPR is the basis for all my business operations, also with the future licensing and distribution partners. Hannes Kankaanpää has helped draft a preliminary licensing agreement template and we have together pondered different pricing models,” says Vapaavalta.

He sees a lot of growth potential for the cold therapy method in the USA, for example, where weight management and activating the brown fat in the body, has already aroused a lot of interest. Another particularly interesting market area is South Korea, because the health culture over there is most conscious. However, the most meaningful use for the method, in Vapaavalta’s view, is its use for relieving pain without the use of medicines.

“Finland alone has more than a million patients suffering from chronical pain. Treating pain costs billions or euros per year: medicines, rehabilitations, absences from work, or early retirements. The cold is a huge resource whose harnessing for maintaining health will produce positive effects for the entire national economy, not just individuals.

Amandan Healthcare now finds itself at a stage where the investments already made have to be secured, the patent applications steered to granted patents, and the IP portfolio put to work and produce turnover.

“Kolster has all the needed IPR, licensing and legal services and know-how to realise my vision.”

Do you need sparring with your company's patent strategy or licensing?