Traditional ski wax company Vauhti Speed is going ahead at full speed. The cleaner and care products it developed for skin skis were recently patented in Finland. The products convinced ski giant Fischer, and patent partner Kolster is proudly following its ski champion’s grip and glide among the industry’s top companies.

Vauhti Speed Oy is one of the world’s oldest still operating manufacturers of ski wax. The company hit the ski tracks with its waxes in 1912, and the ski relay is already on its fourth generation. CEO, Doctor in Chemistry, national team-level ski technician Esa Puukilainen, who even skied competitively on a Junior level, is not okay with staying behind. Instead, he has bravely and courageously started to renew both the company and the traditional ski wax industry.

In 2015, Vauhti Speed started a large-scale product development project related to the next generation of liquid ski waxes and skin ski cleaner and care products. The first thing Puukilainen developed in the project was the Skin Ski Cleaner & Skin Ski Care product line, and applied for patents for the results of his development work. In consequence, he left his inventor’s footprint in the short and meagre patent history of the ski and ski wax industry.

“This is the first patented product line in Vauhti Speed’s history. It has set the company on a growth path and is extremely significant for our future and growth,” Esa Puukilainen describes the accomplishment.

“Without the expertise of Kolster and their experienced patent attorneys, this would not have worked out at all. It has been quite surprising to see just how time-consuming and demanding the patenting process is. Even though I have a PhD in chemistry and am well acquainted with ski waxes, materials and my own invention, I would not have been able to convert it into patent language,” Esa Puukilainen explains.

“The invention solved a problem”

The grip and glide of the skis require the strip of hair at the bottom of the ski to be clean. At first, ski manufacturers recommended that the impurities that stick to the strip of hair from the tracks would be cleaned with traditional hydrocarbon-based cleaners. However, they did not work: the hydrocarbon solvent dissolved the glue behind the strip of hair and the skin started loosening from the ski. More functional products were quickly needed to maintain skis.

“I saw an opportunity and started developing a new kind of cleaner that did not contain hydrocarbon. Ski manufacturers were just as eager to get a well-functioning cleaner and care product line to the markets as we were,” Esa Puukilainen describes the sudden need created by the revolution of the ski market.

“The product development proceeded quickly. I was aided by both my education in chemistry and a strong theoretical background in materials and ski waxes. On the other hand, I have experimental expertise from my competitive skiing days and from when I was in the national team’s ski care team for a long time.” 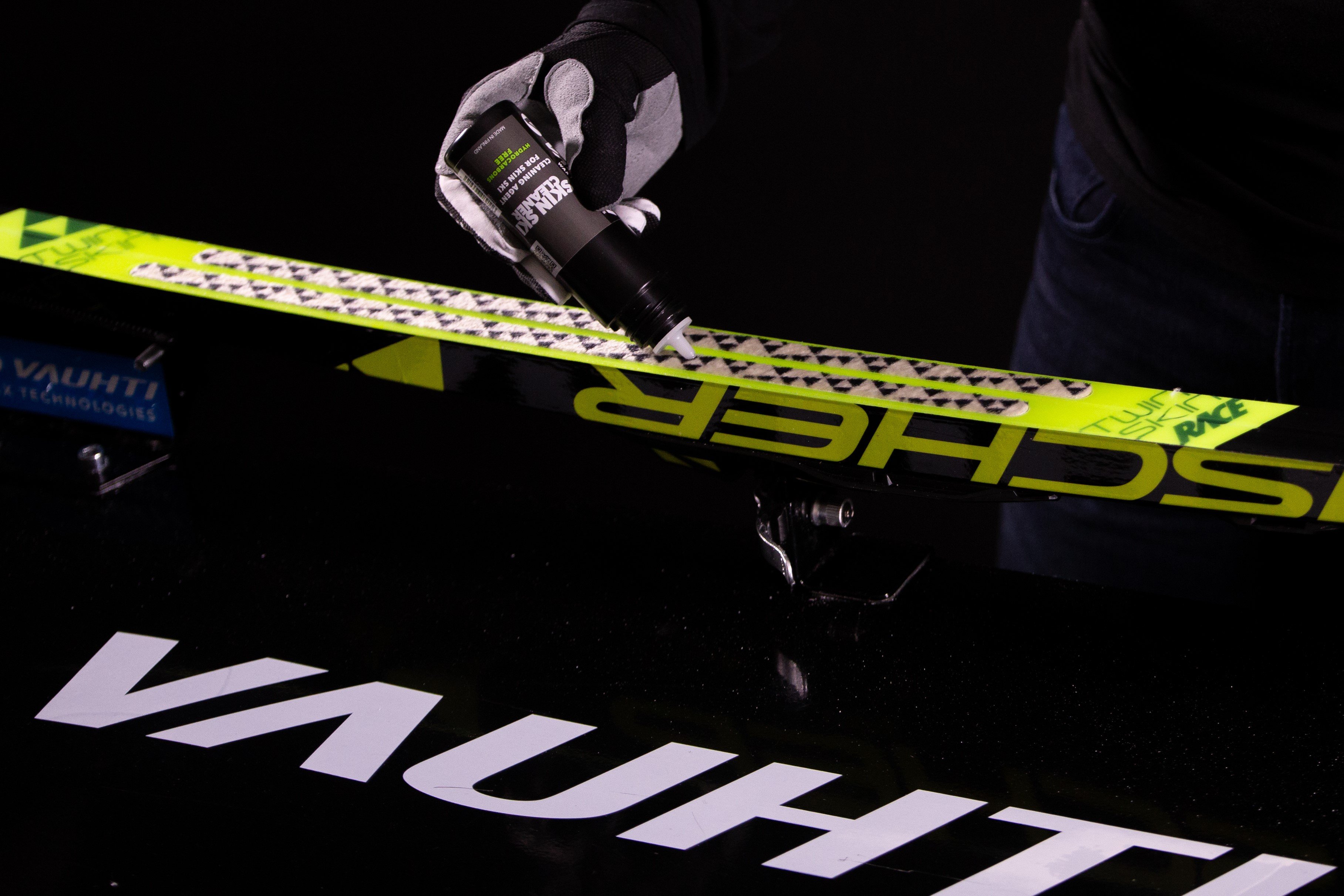 “I tested both consistencies and patent offices”

According to Puukilainen, the development work was different from the product development of traditional ski waxes which demands a wide range of practical testing on snow.

He started out with strictly written research where he examined which glue components are used in skin skis, what the hydrocarbon solvent does to them and what kind of solvents the glue could handle. Next, he chose some solvents and effective agents, mixed compounds and tested them in the ski waxing area by making skis dirty and cleaning them until he found the compound that worked the best.

“The effective agents that improve the cleaner and care properties of skis, or, in other words, that improve the glide and prevent the skis from getting dirty, are crucial in this invention. It is incredibly significant for Vauhti Speed that the composition that I think works the best in skin ski care has now been protected from our competitors.”

Puukilainen explains that choosing a patent partner happened in a similar way. At first, he researched the service supply on the computer and looked for partners that had experience in patenting inventions related to chemistry. Next, he booked appointments with three agencies.

“Based on the discussions, I got the best impression from Kolster’s operations, and the first meeting with the chemistry patent experts convinced me. From there, our cooperation started in 2015. I have received excellent and professional service from Kolster during the patenting process.”

“The world’s leading ski manufacturer Fischer as a partner”

The world’s leading ski manufacturer Fischer was convinced of Vauhti Speed’s well-functioning products soon after the products were launched in early 2016, and the company started recommending Vauhti Speed’s products for their skis.

“We have received extremely good feedback for our products, especially from Fischer, but even from other ski manufacturers. In the past few years, all manufacturers have concluded that skin skis require a specific cleaner and care product. Everyone has given us good feedback on how well our products function,” Esa Puukilainen says, satisfied with the fact that the company can offer a product that suits the new ski technology.

The pending patent applications played their own role in why Austrian ski giant Fischer wanted Vauhti Speed as their subcontracting and product development partner already a couple of years ago. In late 2018, the collaboration expanded even further as Vauhti Speed and Fischer Sports GmbH signed a significant distribution contract.

Fischer is now a distribution partner for the products sold under Vauhti Speed’s own brand — even for the liquid ski waxes and equipment used in competitive skiing — on the key markets for winter sports: Austria, Germany, Switzerland, France and Russia. The collaboration will expand and deepen even on the areas of product development and material research.

“Fischer is a great partner for us in the Central European and Russian markets, where our products have not been widely available before. The collaboration will also give us new opportunities to feature our special products for other snow sports, such as Alpine skiing, on the larger markets,” Puukilainen envisions.

The company plans to double its turnover to approximately EUR eight million in three years’ time.

“We are competing for the ski wax industry’s market leadership”

According to Puukilainen, Vauhti Speed is Finland’s leading ski wax manufacturer. It is also considered as the global pioneer of liquid ski waxes. The products have been used by leading national teams in world cups and elite competitions for decades. The products are regularly tested with team chiefs, waxers and competitive skiers in Finland and abroad.

“Our team of three just participated in the Seefeld Nordic World Ski Championships with our products. We shared information about our products and gave recommendations for the teams,” Puukilainen explains.

As a continuation of the Finnish patents, Vauhti Speed is aiming to snatch country-specific patents even in the most important markets in the EU, Russia, Canada and United States. Kolster’s European Patent Attorney Minna Seppänen from the Chemistry patent team is advancing the international expansion of Vauhti Speed’s patents for her part.

The company’s production facility in Joensuu in Eastern Finland has also been automated and finetuned for heavy growth: the line can produce one completed ski wax product every two seconds, which means 12,000 wax bottles in 24 hours. The value of the global ski wax and waxing equipment markets is estimated at EUR 150–170 million.

“We are planning to take our share of these markets. In the future, we want to be a global market leader of waxing technology, and we are pulling ahead to the global top in good speed. Our new, patented products are significant accelerators in this competition.”

Are you looking for a patent attorney for your chemistry related invention? 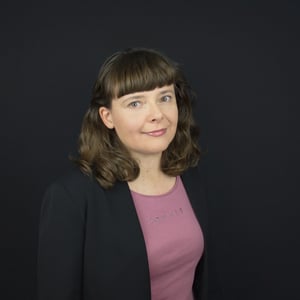