The growth company campus Maria 01 has quickly become one of the largest startup clusters in the Nordic countries. The next goal is to grow into Europe’s leading meeting place for technology companies, private equity investment firms and startup ecosystem players. When the pace of action is high, the IPR partner must also be able to respond quickly.

How to grow from zero to something? Support for the journey is provided by the startup and growth companies’ own campus, Maria 01. In the startup spirit, the campus itself has made quite a growth journey since it started operations in 2016.

“In just over four years, we have managed to create a credible startup cluster, one that meets international standards, in Finland”, says Ville Simola, CEO of Maria 01. 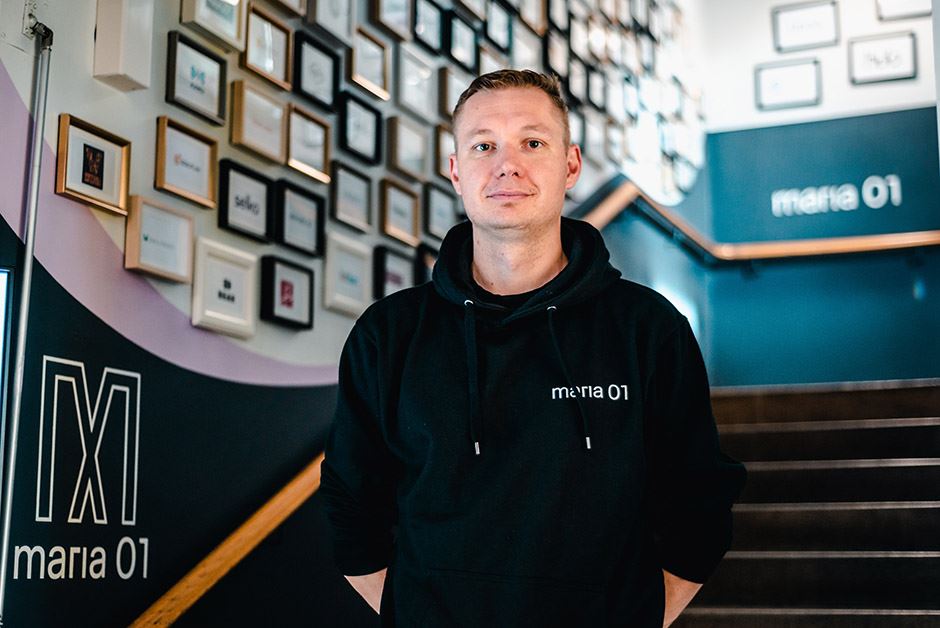 The growth company campus Maria 01 has become a brand that is already widely recognised in the international startup world and connected to Finland and Helsinki. Despite the slowdown caused by the coronavirus pandemic, the campus is now evolving and expanding at a rapid pace as Maria 01 races to compete for the position of the largest technology cluster in Europe.

The pace of activities is high, but Maria 01 has realised that brand protection must keep up with the growth rate and with taking operations to the next level. In the autumn of 2020, the campus began looking for an IPR partner that could implement the international protection of the brand as an even broader entity.

“Kolster came up through recommendations. We also asked for offers from other IP expert companies, but received the quickest response from Kolster and a convincing proposal from Kristiina Kaislisto on how to proceed with the protection. We ended up relying on Kolster’s expertise, because in the startup world, the ability to react quickly plays a big role alongside other capabilities”, Simola describes the start of the cooperation.

Supercluster of growth and technology companies under construction

Maria 01 is a non-profit startup and growth company cluster whose operations are driven by the City of Helsinki, Helsinki Enterprise Agency and the Slush event owner Startup Foundation. The campus was initially started on a small scale, as a pilot project. However, it soon became clear that the cluster was here to stay – and to grow.

"Right from the start, the demand for the opportunity to join the Maria 01 community was much higher than we expected. The original plan of 7,000 square metres proved far too modest. Growth has continued ever since”, Simola says.

‘Not a Hospital’, reads a sign at the main door of Maria 01 in Kamppi, Helsinki just in case. The property previously housed the Maria Hospital, designed by Lars Sonck in the early 1900s, for almost 130 years. Now this former hospital area and its entire real estate mass of 20,000 square metres are occupied by the growth company campus. Last autumn, the Helsinki City Board approved a plan change that enables additional construction in the area, providing Maria 01 with 50,000 square metres of new premises in stages by 2026. In line with the Helsinki City Strategy, the aim is for the area to develop and expand into the largest growth company campus in Northern Europe, with more than 650 new companies and over 4,000 new members.

There are currently more than 180 companies operating in the area, with almost 1,400 community members. They work in either startups or Maria 01 networks, and represent nearly forty different nationalities. The campus hosts 13 major Finnish private equity investment firms, the private angel investor association FiBAN and, as the first foreign fund, the Japan-based NordicNinja. In addition, the network includes a dozen other international investors.

“More than half of Finland’s private equity investment money can be found on the campus. In 2019, Maria companies managed to raise EUR 172 million in investments, and last year the amount reached a new record, more than EUR 200 million”, says Simola, pleased with the great success of the companies in funding rounds.

The Maria 01 cluster also facilitates the work of foreign investors or large companies looking for partners. They can head directly from Helsinki Airport to one address to see Finland’s best businesses and who is investing in them.

“The developing Maria campus will make Helsinki an even more attractive city for international companies, experts and investors.”

The campus is also home to major ecosystem organisations that support the growth of startups, such as talent accelerator The Shortcut, which attracts skilled labour to Finland, and KIRAHub, a real estate and construction consortium that accelerates the digitalisation of the built environment and compiles industry cluster expertise in one place.

The campus and the Maria 01 community also include a number of service business partnerships, as well as a dozen large companies and strategic partners looking for new business and growth areas in cooperation with startups. Together with its partner Danske Bank, Maria 01 has created the Hub.io, the largest job marketplace for growth entrepreneurs in the Nordic countries.

Will the next super-success be born in Finland?

Maria 01 and the entire Finnish startup community believe that the next super-success of the startup world, a ‘GAFAM company’ in the footsteps of Google, Apple, Facebook, Amazon and Microsoft, could emerge in Finland. It is also important for Finland to be able to attract some of the world’s largest technology companies to set up offices here.

“The Maria 01 ecosystem provides good conditions for this. We are already very much on the map in the startup world, and Finland’s impact is clearly greater than its size”, Simola says.

All companies on the campus have ambitious goals to scale their business to international markets. Maria 01 has already managed to help several companies grow.

Simola highlights a few promising campus companies that can already show hard proof. The machine learning-based real estate investment platform Kodit.io recently raised EUR 100 million in additional capital funds, and is one of the startup companies that has raised the most funding on the Finnish scale. Brella turned the coronavirus pandemic into profit by further refining its networking tool into a virtual event concept, the sales of which started to grow strongly. Meru Health is developing its digital clinic into the world’s most effective method for treating depression, anxiety symptoms and burnout. It has already managed to raise more than EUR 10 million in growth funding. The AI-based application Ultimate. Ai automates customer service processes, and the company just received over EUR 16 million in private equity investment money.

Another success story highlighted by Simola is Naava, which commercialises smart green walls and was one of the first Maria 01 campus companies. So far, the company has been able to double its business growth every year. Its vision is to make clean indoor air available to one billion people by 2025. 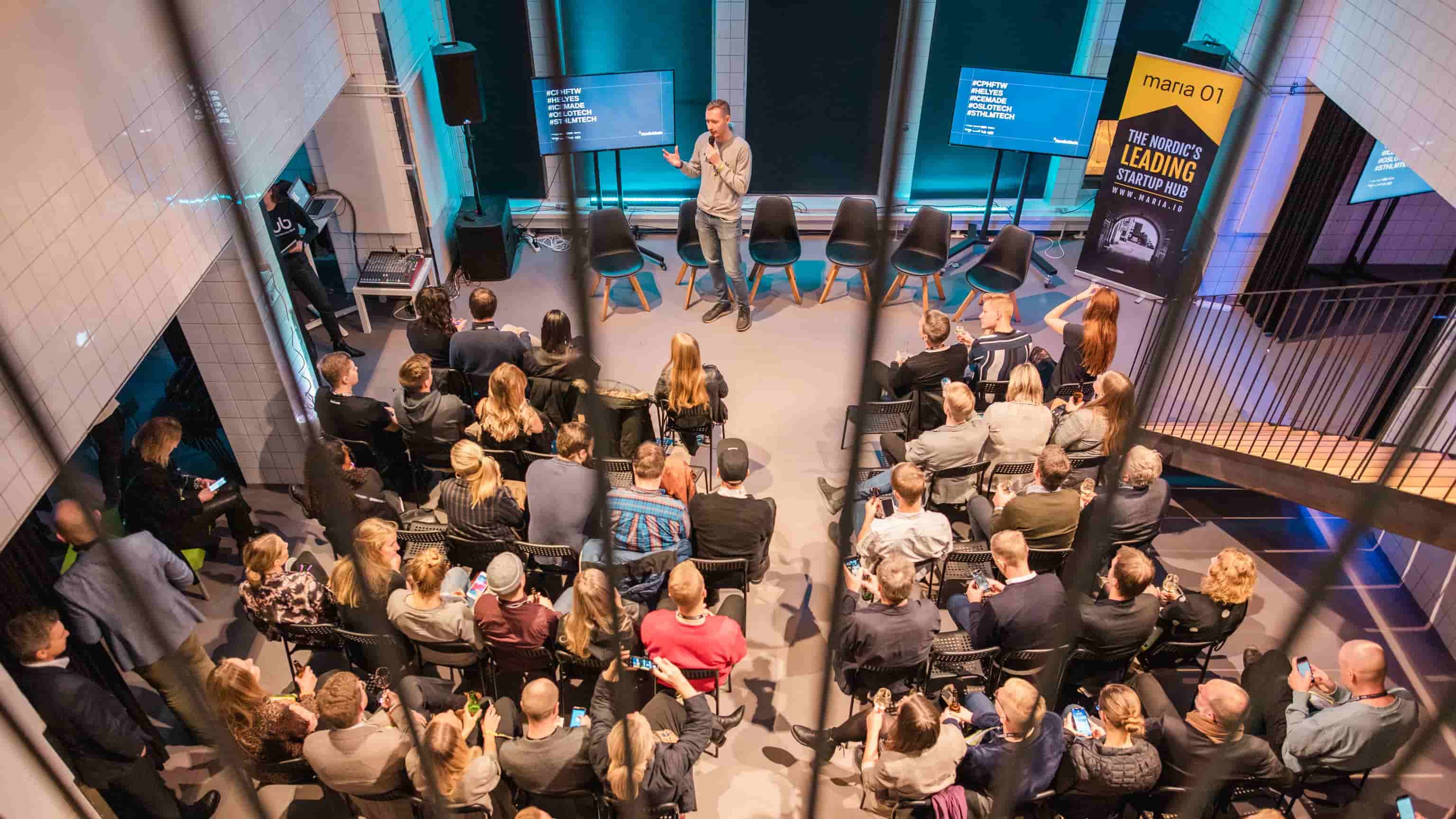 The impact of startups is greater than their size

Finnish startups do well in European comparisons – including with respect to coping with the coronavirus pandemic. According to a report published by Nokia Growth Partners (NGP), Helsinki ranked second last year, immediately behind Zurich, among the cities that raised the most venture capital investments. Investments in Helsinki were up to 62% higher than in the previous year. Helsinki’s value in the startup and investor community is growing all the time.

Maria 01 also assesses and measures the impact of its startups by means of  other than traditional economic indicators.

“According to our research, the impact and added value of startups from the perspectives of society, health, the environment and knowledge capital is very positive and significant in relation to listed companies. Maria companies already pay a significant amount of taxes and create new jobs in relation to their size, and their environmental burden is very low”, Simola describes.

Maria 01’s vision is to be Europe’s leading startup campus in the future, including in terms of all the added value that the companies bring to society. Simola calls for the same added value from the IPR partner as well. An IPR partner brings the best added value when it is able to provide proactive expert services at the right time.

“In a startup environment, doing comes first, and some things just get ‘forgotten’ at times. The IPR partner can act as a good reminder and ensure that there are also checkpoints at certain stages for updating IPR matters and putting them in order.”

Currently, approximately 5,000 startups are born in Finland every year. Maria 01 is working to ensure that Helsinki’s startup ecosystem is able to compete with the top hubs in the world and attract expertise and private equity investments to Finland.

“Maria 01 can serve as a beacon station in this attraction process. When Finland is looked at from a global perspective, we must have a single strong startup cluster – and a unified brand supported by trademark rights.”

Want to discuss the protection of your brand in the international market?