The indoor growth method of plants and herbs, developed by Plantui Oy in Finland, is making a significant breakthrough in global markets. The world conquest of smart home gardens is boosted by a carefully built patent portfolio in cooperation with Kolster.

Plantui was set up in 2012 as a start-up company eagerly seeking to grow, and is now enjoying a phenomenal growth. Its smart home garden concept has charmed investors, consumers and international distributors - the latest was BSH Hausgeräte GmbH, the leading manufacturer of domestic appliances in Europe. The companies recently published an important partnership, product development, and distribution agreement.

BSH wanted the smart gardens developed by Plantui in Finland as part of their global product offering, which includes highly-rated domestic appliance brands such as Bosch, Siemens, and Gaggenau. The first Plantui gardens sold under the Bosch Smart Grow trademark have already been introduced to an international fair audience.

Information on finding a global partner also encouraged new major investors to the company and generated an additional funding of 1.4 MEUR to commercialise smart gardens.

According to René Österman, CEO of Plantui, the new agreement expedites the sales growth of Plantui and steps up product development and defending of patents.

The starting point of growth is a magnificent product and rewarded design, but the carefully built IP protection of the device and growth method played a big role in finding the cooperation partner and in the agreement negotiations.

“Without investment in international patent protection we could not have reached such an agreement. BSH had done a most careful due diligence valuation on many suppliers in the field. It chose Plantui as its partner, because we had done our IP homework properly. For both investors and distributors it plays a major role that IP protection is in order when a product is sold under their quality brand,” says René Österman.

According to him, patents have an unbelievably large role in attracting financiers and cooperation partners. Without exception, two key questions are posed at the negotiation tables: Is the product protected? Where is it protected?

“The seed of the invention in space research”

The innovation protected by a patent is based on a research by a group of experts on optimizing the nutrients as well as water and light that herbs and plants need. Kari Vuorinen, CTO at Plantui, says that the seed of a smart garden originally started from plant production developed by Nasa for space missions. By examining the first American applications, an idea of an almost automatic home garden began to take shape, which integrates all the growth stages from germination to harvest into one device and a very clean water growth method.

Each stage of growth can be separately adjusted in an automated manner, and provide a plant with exactly the right kind of light at its different growth stages. This makes it possible to affect the taste and vitamin content of the plant already in advance - entirely without gene manipulation.

“Under the guidance of Kolster, we furthered the patenting of both the device and the method at the same time. We were truly pleased when we were granted a patent also for the method, as that means that the invention is now comprehensively protected by the patent. Before starting the patenting process, Kolster examined for us what had already previously been protected in this area of technology, so that our freedom to operate on the market was ensured. At the same time, we obtained valuable information  on which “slot” to place our own patent,” says Kari Vuorinen.

According to him, a small company has no time or money to enter into patenting practices and legislation, let alone how to write a patent application so that the granting of the patent is ensured.

“That’s why it is worthwhile for a small company to choose a partner with as extensive an IP knowledge as possible.”

Plantui’s goal for the forthcoming years is to grow fast and become international with the aid of new cultivation platforms and a more extensive plant capsule offering. Products of a new generation are already being designed, with the specific goal of boosting the sales of the plant capsules. The strategy additionally includes licensing of the growth method to further the growth even more.

“Patents open new opportunities in changing business operations in the future, such as moving from manufacturing to licensing and development business, and from consumer business to business-to-business sales,” say René Österman and Kari Vuorinen.

An additional goal is to boost the Plantui brand because the growth of direct sales to international consumers in Plantui’s own online shops is an important development target. This is prepared for with trademark registrations and country-specific domain names on the sought-after market areas in Europe, the USA, and Asia.

Plantui has trusted Kolster’s expertise also in protecting the brand. 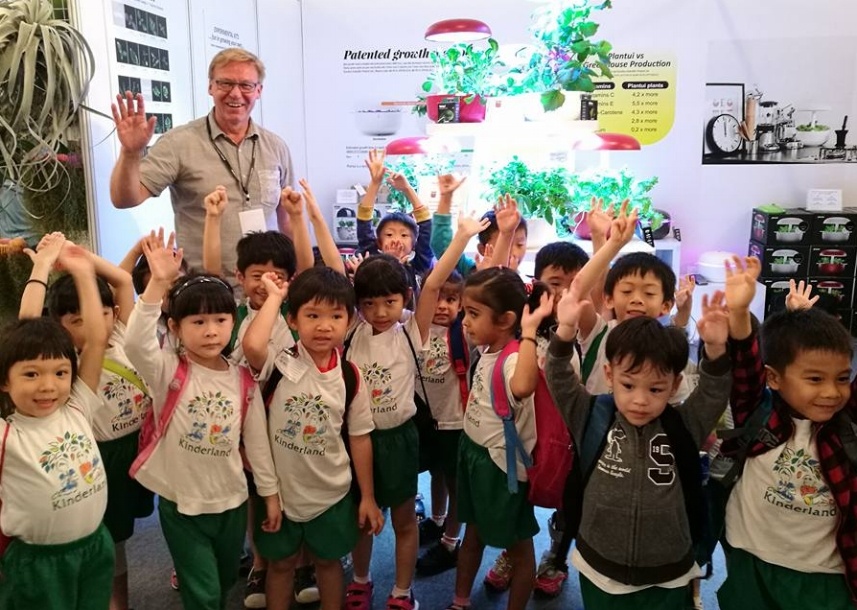 Plantui is seeking global growth, secured by IPRs. CTO Kari Vuorinen at the stand of the local partner, Plantui LLP Singapore, at the Singapore Garden Festival. Plantui products interested also the home gardeners of the future.