Only three years after its foundation, Aalto Haitek is already making a major international breakthrough. Inspired by a children’s building kit, its ecological wave layered timber and completely new construction technology are of interest worldwide. The journey to the global markets of this Toholampi-born innovation is being safeguarded by patent and trademark protection built at Kolster.

Aalto Haitek’s founder and Director of Development, Janne Honkala, faces significant but delightful challenges. The factory production of the wave-shaped and glue-free massive wood elements started in Toholampi, located in the Central Ostrobothnia region in Finland, in February 2020, and demand is outstripping supply many times over already at the initial stages.

“The capacity of the new production facility is nowhere near enough, the demand is just fierce. Orders are coming in from all over the world, with enquiries about up to thirty thousand houses. There is no way we can make such quantities”, Janne Honkala describes sales obstacles that many companies can only dream of.

The company was founded only in 2017, but already has a strong grasp of the international market.

Aalto Haitek aims for strong growth, but Honkala does not dare to make new deals until he is confident of deliveries. Production bottlenecks must first be resolved by means more powerful than the plant in Toholampi.

“We are planning to license production. We are looking for partners who value ecological construction and who could also manufacture Aalto Haitek’s products abroad from local wood”, Honkala says. 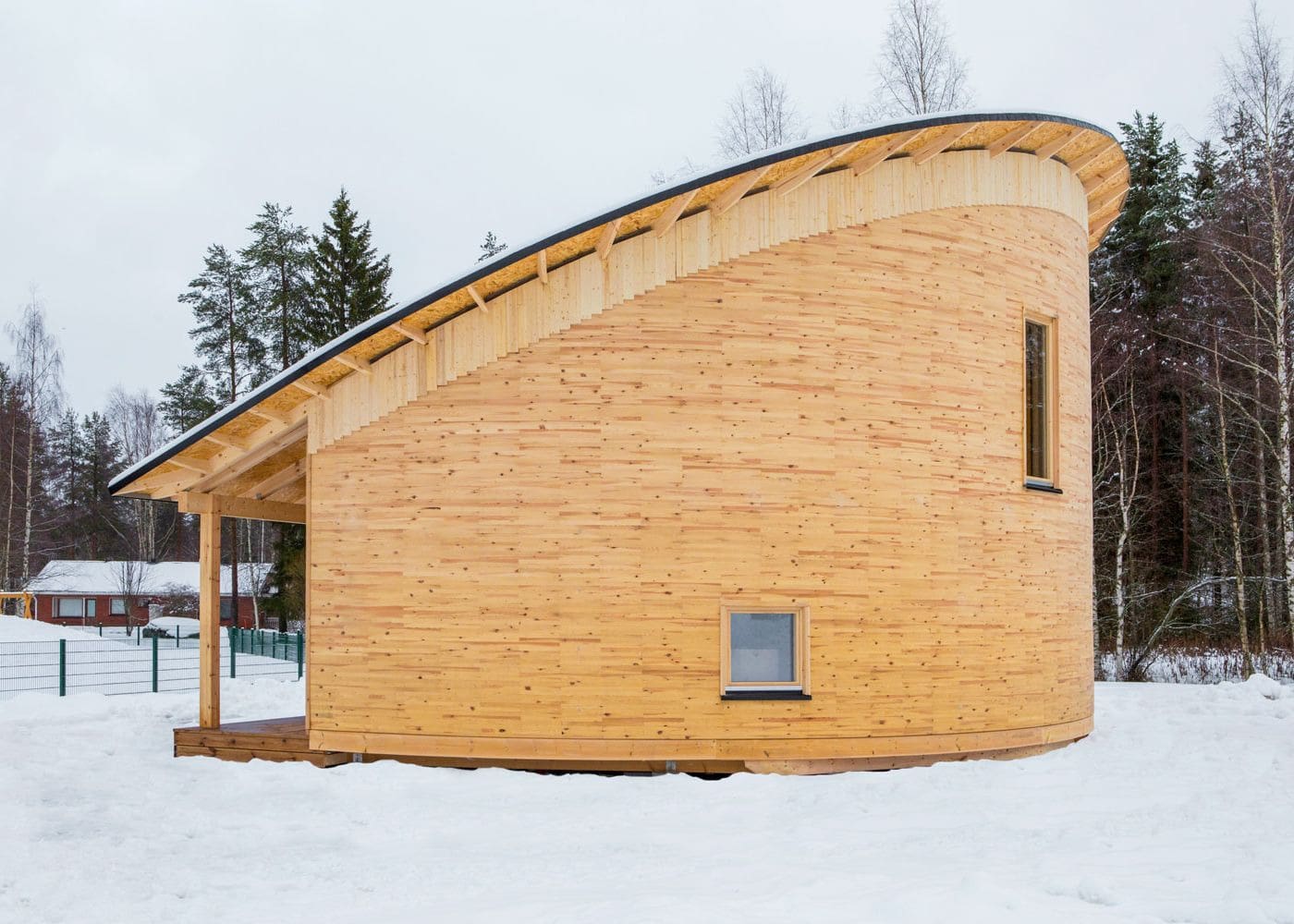 
“Skyscrapers to Japan, bridges to China, a new ceiling for Notre-Dame?”

Aalto Haitek has already implemented several medium-sized pilot projects in Finland. Arched bridges for bicycle and pedestrian traffic in Kokkola and Muurame, a kindergarten's pavilion in Toholampi, buildings of the Huopalahti station in Helsinki and an accommodation project in Mäntsälä.

Along with domestic interest, foreign demand is exploding. In Asia alone, a hundred companies are waiting to be invited to explore Aalto Haitek’s wave layered timber technology and production at the Toholampi plant. Several foreign pilot projects are underway.

“Everything is now progressing faster and in a bigger way than we could ever imagine”, Janne Honkala says.

In November 2019, Aalto Haitek attended the Home and Building Show in Tokyo, Japan with Business Finland. It was a success.

“The Japanese got excited about building a skyscraper made of wave layered timber, and pilot projects are being planned there. A notable corporate cluster, the Sumitomo Group, visited the stand with a large delegation, and one of their chief engineers was truly impressed and thrilled. Even the Japanese government is very interested in the possibility of producing wave layered timber from cedar and increasing cedar wood construction. They are now sending us the first batches of wood for test production”, Honkala describes international opportunities for licensed manufacturing from local wood materials.

After the fair, contacts regarding test production for different types of wood have been coming in from elsewhere as well. In addition to Japanese cedar, tropical wood species from Indonesia and local poplar from Hungary’s state-owned sawmills are on their way to Toholampi.

Chinese partners, in turn, are particularly interested in arched bridges made of wave layered timber, and bridge pilots are in the pipeline in China. There have also been, for example, enquiries from Australia to construct entire cities, contacts from the United States about luxury villas to be built in the Caribbean, partner enquiries for major construction projects in the United Arab Emirates – even an enquiry from France about glue-free replacement of the curved ceiling structures of the cathedral of Notre-Dame, which were destroyed in a fire.

“It would be quite the pilot project if we could build the ceiling of Notre-Dame, or even just a part of it. Or if we got a fraction of the arched bridge projects favoured by the Chinese for park-like construction – even that would mean millions of bridges.”

Wave layered timber structures have also proven to be very strong in tests, and even earthquake-proof.

“When the elements are not glued wood, they are flexible and do not break in earthquakes like glue boards do. We also have natural and effective agents against termites.” 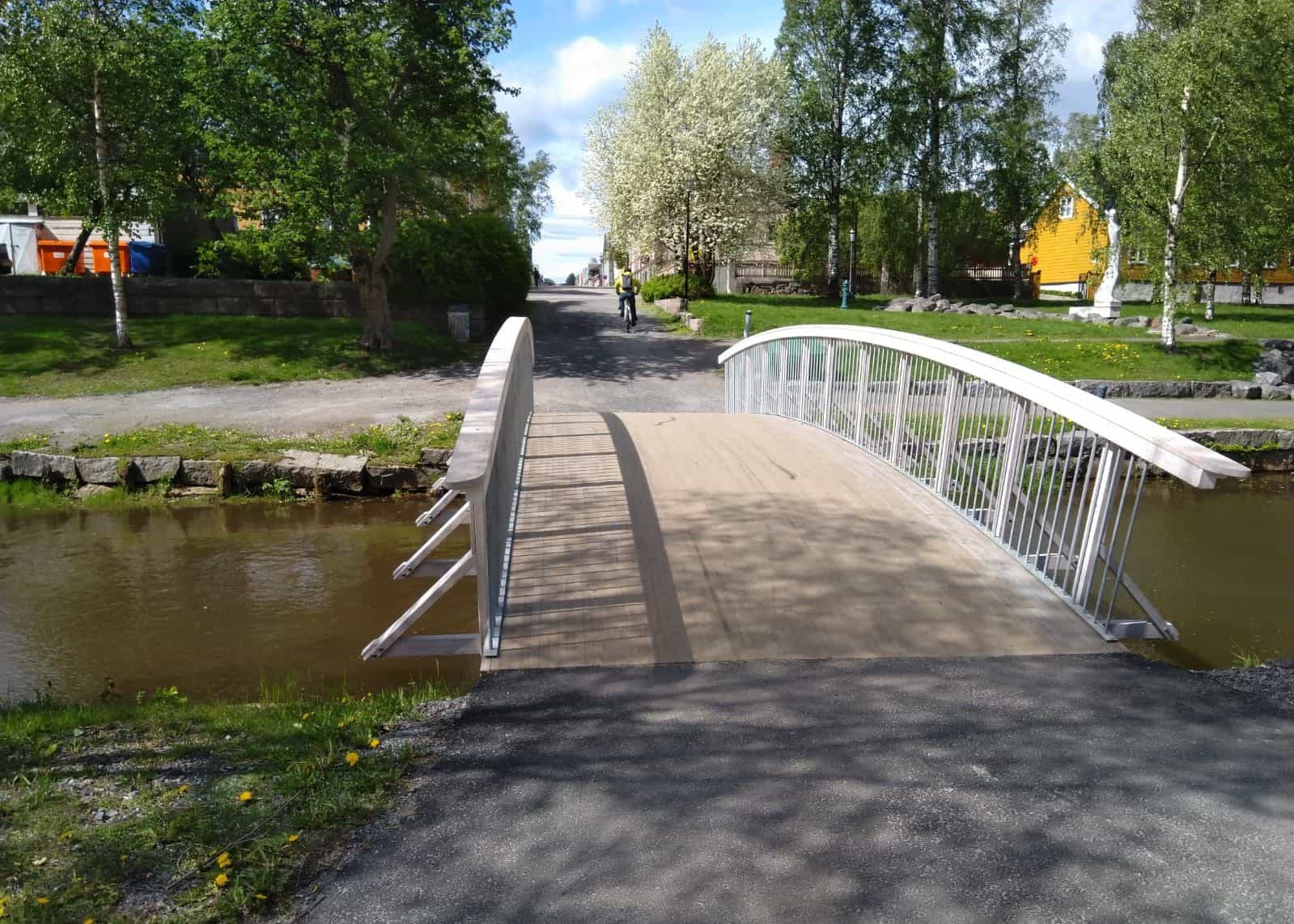 “Without patent and trademark protection, the idea would already be in the hands of others”

The wave layered timber invention originally sprang up from the musings of Janne Honkala’s uncle, carpenter Tapani Honkala. He was heating up the sauna using cardboard boxes from children’s building kits and began to wonder whether it would be possible to create building blocks that would bend to different shapes from wood as well, without using glue. In the hands of a professional, the blocks began to form. As the first pilot, he built an intermediate floor and a floor for his own summer cottage. Then he became enthusiastic about building arched bridges.

His nephew Janne, a master builder and specialist in traditional construction, was invited to take a look at the bridge solution developed by his uncle in 2017. In a flash, he realised the enormous potential to revolutionise the entire wood construction industry with the wave layered timber elements and ingenious building method suitable for healthy construction – in any project.

“I first looked at the curved bridge beams, and when I saw those straight elements as well, I realised that they could be used to build anything – even a house in the shape of an Aalto vase. The blocks can be overlapped into parallel or crosswise waves, and it is possible to create even thick structures by attaching elements together using a screw bar or wood dowels.”

Janne Honkala took action. He founded Aalto Haitek and began developing business ideas further. From the outset, it was also clear that international protection must be put in order to prevent the invention and ideas for its further development from being hijacked.

”If we did not have utility models, patents and the registered trademarks WLT® (wave layered timber) and Aalto Wood® already granted to us at this point, I am certain that the invention would have been snatched. There would already be big production happening abroad”, Honkala says. 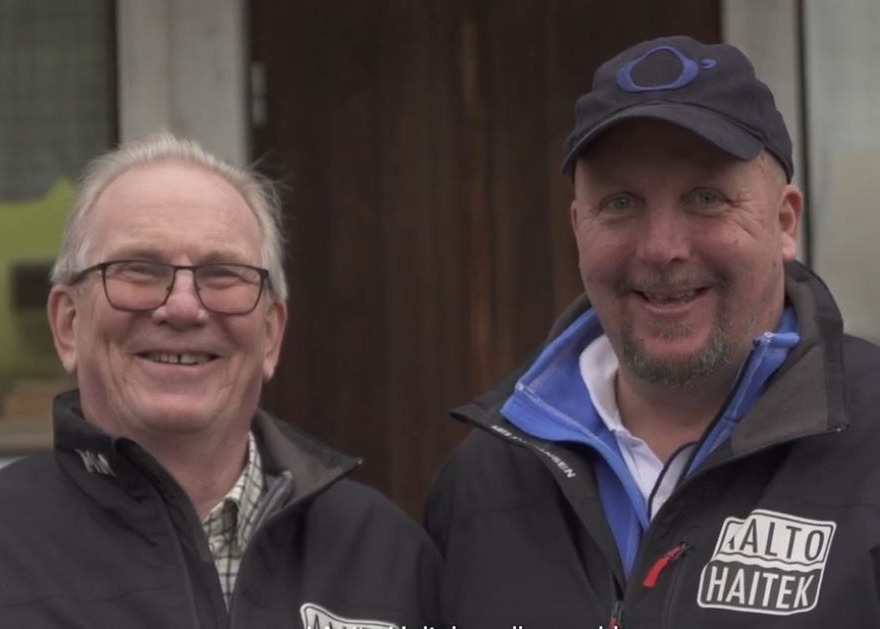 Immediately after establishing the company, Janne Honkala arranged a meeting with Kolster’s patent attorney Håkan Niemi. Honkala wanted to ensure that wave layered timber, the joining techniques, and various product ideas and their implementations were quickly protected as comprehensively and geographically extensively as possible.

Tapani Honkala and Håkan Niemi had already previously protected the basic invention. It had a valid patent in Finland and several European countries. Janne Honkala had many ideas for further development, the protection of which he wanted to discuss.

From a patent attorney’s perspective, the pool of different product ideas and implementations has been exceptionally abundant. This has required careful consideration of how to approach each further development idea from a protection standpoint.

“We talked a lot about how to get different ideas under the same 'patent umbrella'. Many ideas were compiled into an overall concept for which protection has been sought more widely on the international market. It would not have been cost-effective for the customer to file a separate patent application for each individual idea”, Håkan Niemi says.

A lot of advice has been required from the patent attorney, especially on what is a wise, sensible and cost-effective protection strategy.

“On my own, I would never have been able to solve these issues. I drew a lot of different designs, and Håkan studied them from a protection point of view. He explained what is essential for the patent application, what is unnecessary, and what must definitely be added. The job was completely dependent on Håkan’s professional skill”, Janne Honkala says.

With Håkan Niemi’s advice, the protection of new ideas progressed first with Finnish utility model applications. Janne Honkala was already very keen and in a rush to start selling products domestically. A utility model comes into force faster than a patent, at best in less than four months in Finland.

“I only dared to start marketing after even those new ideas were protected. I called Håkan almost daily and asked if I could start selling yet. I presented the products for the first time at the Pytinkimessut fair in Seinäjoki, and the utility model protection had come into effect the day before”, Honkala recalls.

The three utility models granted in Finland have since also served as the basis for country-specific patents applied for through the international PCT and the European EPC application systems on Aalto Haitek’s important export markets in Europe, the United States, Canada, Australia, Japan, South Korea and China.

“A utility model is fast and cost-effective. In addition, it can be converted and expanded into a patent application within one year, and the right of priority it provides can be used to pursue international patenting in desired target countries”, Håkan Niemi says.

The special drying technique of the wood also plays an important role in the unique wave layered timber innovation. It ensures that the wood will no longer "live" or crack after construction, but the structure remains tight.

“We are able to produce extremely durable wood, like if it was a hundred years old, in a couple of days, with the moisture content of the wood being close to zero.” 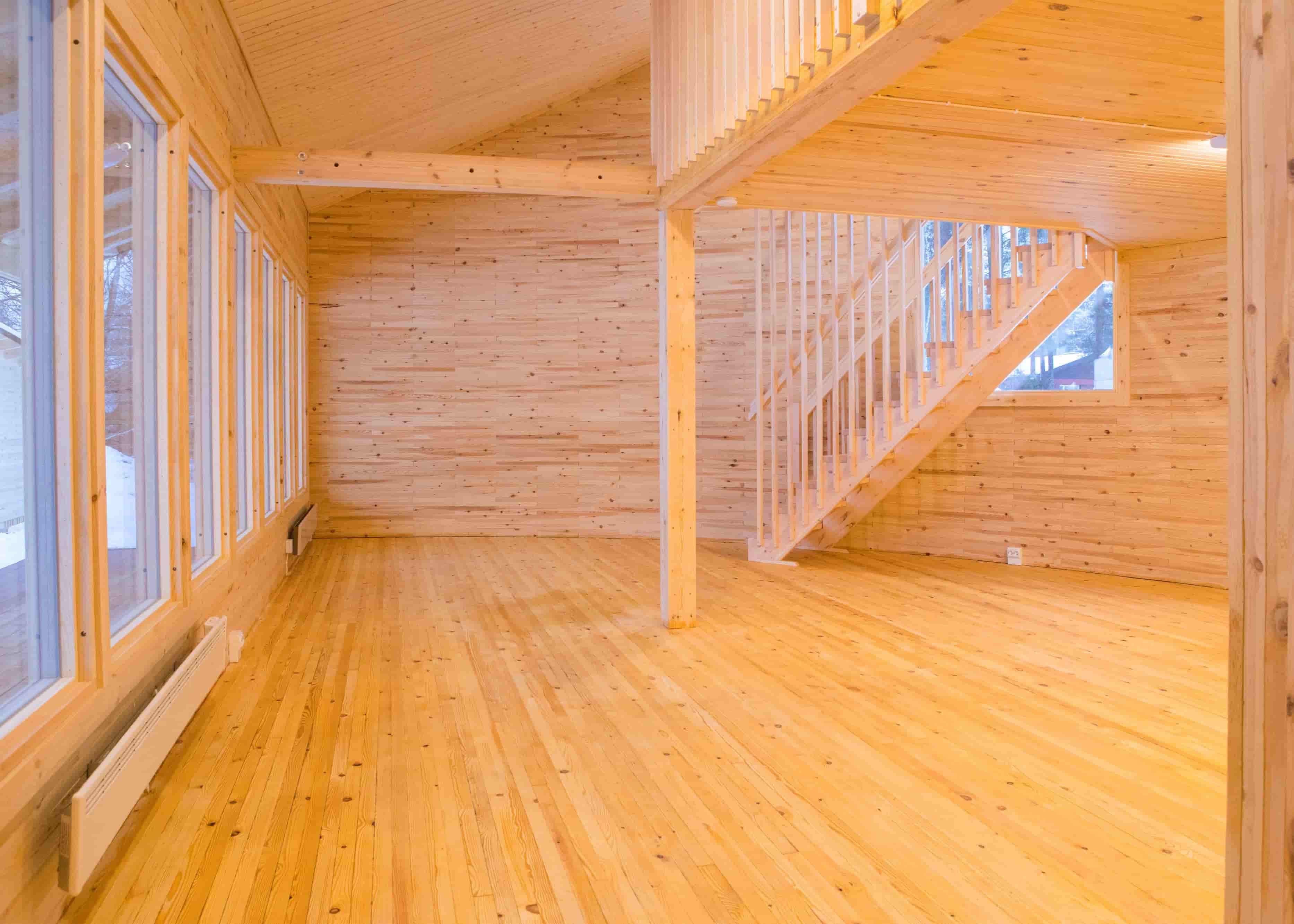 Architects and developers are excited about the new “creative building blocks” and the opportunity to use glue-free wooden structures. Cities are particularly interested in construction projects targeting schools and kindergartens, many of which are struggling with indoor air problems.

It is fair to say that Aalto Wood® is also part of Finland’s growing bio and circular economy.

“We are able to make very durable building elements that are just wood and do not contain any additives. Aalto Wood® will last for hundreds of years and many generations, and it is a fully recyclable and biodegradable material even after disassembly. When a house lasts for 300 years or longer, the amount of wood used to build it will regrow in the forest three times over within the same time period. This is a genuinely sustainable construction.”

This year, Aalto Haitek is also focusing on its brand, and a trademark protection strategy is being honed with Kolster’s trademark experts. Aalto Haitek will also become a group. In addition to the manufacturing of wave layered timber elements, different business functions – house building, bridge projects and glue-free special structures, such as beams and timber preserving using various natural substances – will be centralised into their own subsidiaries.

“The goal is for the Aalto Wood® brand to be known worldwide for its ecological wave layered timber and method of construction in accordance with sustainable development – widely, much like the architecture of Alvar Aalto.” 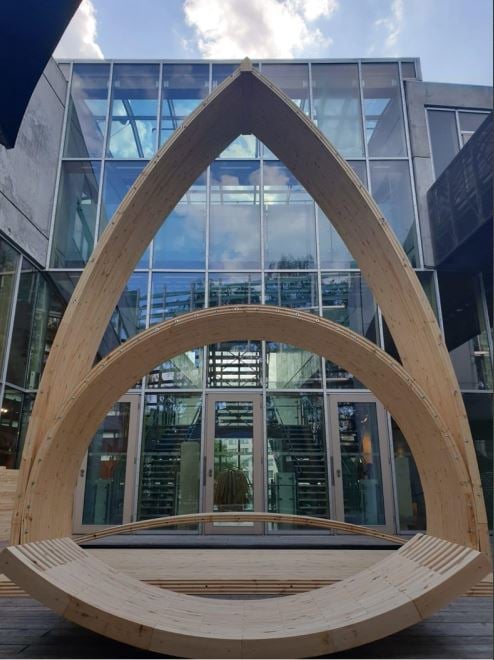 Aalto Haitek presented the possibilities of wave layered timber construction at the Wild Wild Wood exhibition at the Pan-Nordic Building of the Nordic Embassies in Berlin on 3 July–29 September 2019. Photo: Aalto Haitek

Want to discuss international protection for your technical innovation or brand? Contact our experts.

Protect the uniqueness of your company