In addition to Finland, there is clear demand for Kolster’s unique IP expertise in China. Kolster’s EU trademark clinic was a hit in this autumn’s China Trademark Festival, where the company also obtained a rare recognition.

European companies seeking to enter the Chinese market are not the only ones to benefit from the Kolster China Desk™ service. Chinese brand owners and IP experts have also discovered the service. The disputes between the world’s trade giants, the US and China, and the revolution of China’s IPR system are putting Europe at centre stage.

“The protection of Chinese-language trademarks is currently weak in Europe, and Chinese companies have begun to realise the importance of protecting brands and trademarks in business. Due to the trade war with the US, these companies are now actively looking for new markets in Europe”, says Kolster’s Head of Asian Market.

There were more than five million new trademark applications filed in China last year. This year, the number of applications is estimated to rise close to eight million. The competition between innovations and brands is intensifying in China.

“Authorities are also more eager to intervene in trademark squatting. The Chinese are thinking about their own IP strategies and how to maximise their intangible assets through intellectual property rights”, Kolster's Head of Asian Market says.

This was also a strong theme at this year’s China Trademark Festival (CTF2018), where Kolster held an EU trademark clinic for the members of the China Trademark Association. Kolster was also the first foreign company to take home an award from this major international event, in recognition of its long-term work in the trademark field.

Kolster’s clinic was a hit

The China Trademark Festival is the largest annual trademark event in China. It is organised by the Chinese Trademark Association, CTA, with support from the Chinese government.

The participants include Chinese brand owners, trademark attorneys and representatives of IP organisations and trademark authorities. Kolster held an EU trademark clinic themed on the protection of Chinese trademarks in Europe.

“We provide regular training on Europe’s trademark system to the members of the China Trademark Association,” Kolster's Head of Asian Market says.

The theme of this year’s clinic raised a lot of questions on how Chinese-language trademarks are protected in Europe.

“The protection of Chinese-language trademarks is currently weak in Europe, and this needs to change. Indeed, Chinese brand owners and attorneys are pushing for Chinese to be recognised by European trademark authorities as one of the languages spoken in Europe."

Time to replace the trademark system?

The CTF event and Kolster’s trademark clinic saw some lively discussion on the trade war between the US and China, its effects on the IP industry and the development of trademarks in China. All of this is making Europe increasingly attractive in China.

“In practice, this would mean that early registration of a trademark would not be so crucial in China as it is now, as exclusive rights could be established through use. This would help companies that have adopted a trademark in China but ‘forgotten’ to register it.”

Major award in the IP industry 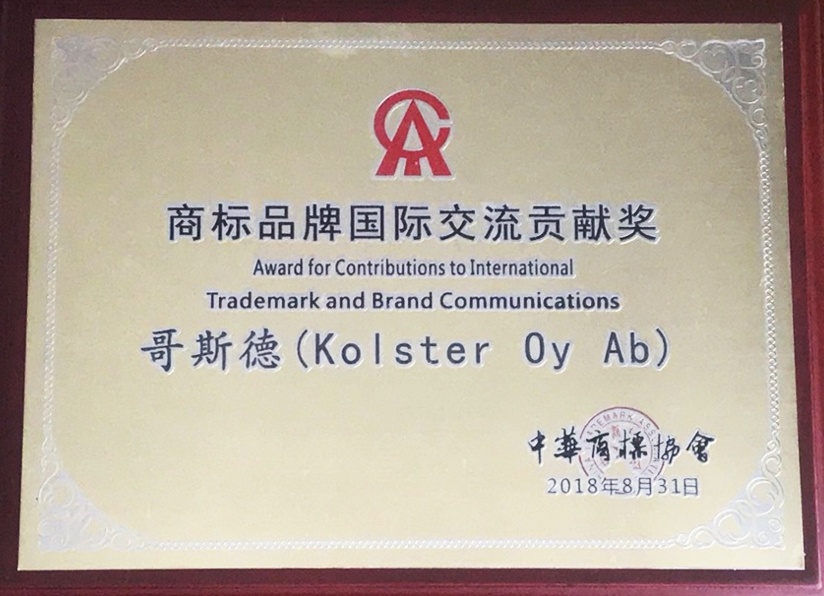 At the CTF, Kolster's Head of Asian Market accepted an award that was given to a foreign company for the first time in the event’s history. In addition to Kolster, international trademark associations INTA and MARQUES and Japan Patent Attorneys Association (JPAA) took home awards from the event.

The award ceremony in front of an international audience was a natural next step from Kolster’s acceptance as the first fully endorsed foreign member of the China Trademark Association in June 2017. In this role Kolster is also able to actively highlight the needs of European trademark holders in the Chinese market. This is a relationship that has intensified over the decades.

“We at Kolster are proud of the fact that our long-term work as ambassadors of IPR knowledge and defenders of IP rights is bearing fruit and our cooperation with China’s leading IPR actors is deepening”, Kolster's Head of Asian Market says.

Kolster and the China Trademark Association (CTA) are maintaining a close partnership. Next, CTA’s President, Mr. Ma Fu and his delegation will visit Kolster in Helsinki and meet with Finnish trademark holders.