The Chinese carrier Juneyao Air launched direct flights from Shanghai to Helsinki last summer. Helsinki is the third home base of the airline company, alongside Shanghai and Nanjing, and serves as a gateway to Europe for this airline company, which carried 18 million passengers last year. In spring 2020, flights from Helsinki to Keflavik, Dublin and Manchester will begin. Kolster is the legal partner of the fast growing airline.

Helsinki-Vantaa is the new home base of the booming Chinese airline Juneyao Air. In addition to the Shanghai route, it is becoming an important hub for European flights for the company. From March 2020, Juneyao Air will fly from Helsinki to Iceland, Ireland and England, with destinations in Keflavik, Dublin and Manchester. In addition, the spring plans include direct connections from Shanghai to Athens, Greece and from Shanghai to Istanbul, Turkey.

“Helsinki was our first flight route to Europe. With Kolster, we have been able to set up a branch office in Finland and start up our European business efficiently and quickly”, says Mr Xiang Xu, Finnish Branch General Manager of Juneyao Air.

Mr Xu tells that Juneyao Air came to Europe with a humble attitude and realistic expectations, but the company is very pleased with how well the business has started.

“Already during the first summer months, more than 80 percent of the seats on the Shanghai-Helsinki route were full, and now, in the winter months, about 75 percent. Operating the flights has been profitable from the start.” 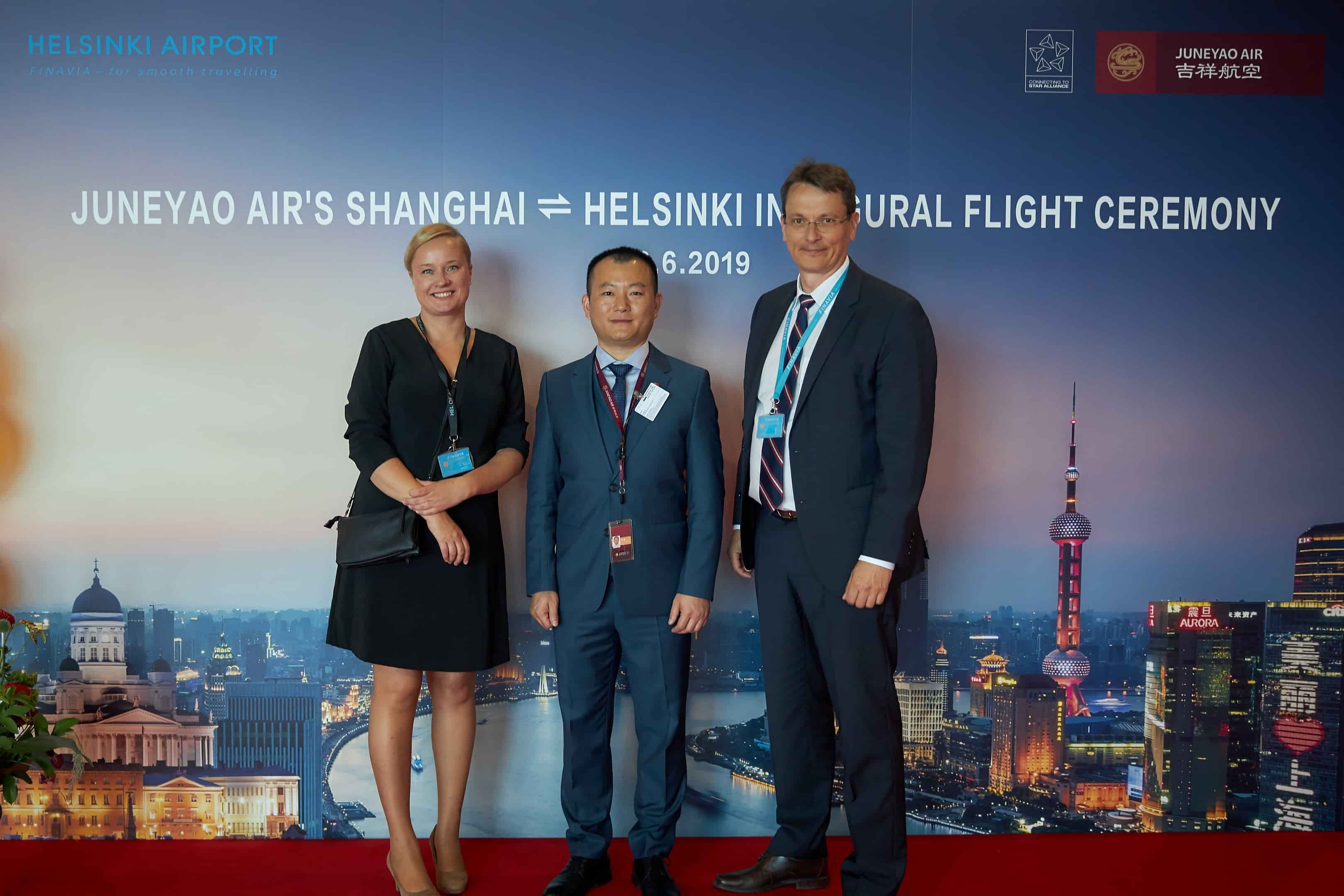 Juneyao Air's first flight, operated with a Boeing 787-9 Dreamliner, landed at Helsinki-Vantaa on June 28, 2019. The route from Shanghai to Helsinki-Vantaa is, for the time being, Juneyao Air's only intercontinental flight. At the inaugural flight ceremony, Finavia was represented by Joni Sundelin, CEO of Helsinki Airport, Anne Tuomi, Marketing Manager and Petri Vuori, Sales and Route Development Director − in the middle of the picture is Mr Xiang Xu, Finnish Branch General Manager of Juneyao Air. Photo credit Finavia, Petri Salminen.

Kolster made it possible to establish a branch

Sanna Häikiö, Counsel at Kolster, tells that a company from outside the European Economic Area (EEA) needs a legal representative domiciled in Finland to establish a branch.

“We assisted the company not only in setting up a branch office, but also in obtaining work permits, opening bank accounts, and in all the necessary documentation and translations. We also assisted with tax matters and liaised with the tax administration. Initially, we were acting as Juneyao's official mailing address until they found the office and got their own address."

Juneyao is a listed company in China, however, according to Mr Xu, when coming to Finland, the company was comparable to a startup. The company needed general legal support in a number of practical matters to start a business in a foreign environment.

“Kolster acted as our legal representative and made it possible for us to successfully register our branch in Finland. We received very practical advice from counsel Sanna Häikiö, and it was easy to get on when Kolster China Desk has been supporting the communications. In practice, Kolster led the project, and we just followed the instructions we received”, Mr Xu describes the straightforward and easy cooperation.

“We got answers to all our questions without delay, which was important to us. Sanna Häikiö also turned out to be a warm-hearted lawyer, who thinks on behalf of her client”, Mr Xu describes the collaboration.

Collaboration with Kolster in legal issues will continue along with the company’s growth in Europe and as new needs for legal help emerge.

“We have preliminarily discussed, for example, EU GDPR regulations and legal issues related to staff recruitment. At the moment, it is very actual to prepare our business launch in Iceland. We have already received a recommendation from Kolster for a trusted local legal partner.”

Last year, more than 550,000 passengers flew between China and Finland. The number of Chinese tourists to Finland and Europe is expected to increase significantly as more direct flights from China to Finland are available, followed by connecting flights within Europe. Respectively, new travel opportunities emerge from Finland to China and elsewhere in Asia. The growth expectation is based on the Action Plan on Promoting a Bilateral Aviation Partnership between China and Finland, published in January 2019.

Juneyao Air closely cooperates with Finnair. The companies launched the so-called codeshare in the summer. This means that the two airlines add each other's codes, AY and HO, to their agreed flights and can act as direct connections for each other's flights. Finnair's customers will thus receive a more favourable pricing to Juneyao's routes within China and elsewhere in Asia, and respectively, Juneyao's customers to Finnair's European routes and elsewhere to Finland.

“Close and good cooperation with local airlines is very important to us”, Mr Xu says.

One of China's top 100 companies

Juneyao Air is part of the privately owned Shanghai Juneyao Group, one of China's top 100 companies. The company started aviation with domestic flights in China in 2006, and has since expanded rapidly. Juneyao is listed on the Shanghai Stock Exchange, and already has more than 160 domestic and international routes. The company is a partner of the world's largest global airline alliance, Star Alliance.

Over the past year, the company has increased its turnover by more than 16 percent, and European routes are expected to continue the growth. In addition, the vision for the future is to expand routes to the United States.

Juneyao Air currently has 75 aircraft, of which 69 are Airbus A320 series aircraft and 6 are Boeing 787-9 Dreamliners, which are presently used for flights between China and Finland. By the end of 2020, the company will have 10 Boeing 789-9 Dreamliners in total.

According to the company's slogan, Juneyao Air wants to provide business and leisure travellers with safe, in time, friendly and high-quality service. The brand emphasizes the Asian culture, which is reflected in the company's logo and flight crew attire.

Are you starting a business or are you internationalizing your business? Contact our corporate legal specialist.

READ MORE about our legal services and legal support for business: