Originally designed for icebreakers, Azipod® is now the world’s most common propulsion system, including on cruise ships. On a typical Baltic Sea ferry, Azipod® propulsion system reduces carbon dioxide emissions by 10,000 tonnes per year compared to a traditional propulsion solution. The innovation was so revolutionary that the granting of the patent FI76977 took ten years due to obstruction by competitors.

The Azipod® thruster is a masterpiece of marine technology born of the need to develop more durable and efficient propulsion systems, especially for icebreakers. The Azipod® product is a pioneer: with it, the energy consumption and greenhouse gas emissions of ships and various floating vessels have been reduced by up to a quarter.

What is the background of the Azipod® product, Kolster’s Patents Director Tapio Äkräs?

In the late 1980s, the Finnish Maritime Administration, Strömberg Oy (later ABB Strömberg Oy) and the Masa-Yards shipyard started designing a propulsion device to replace the traditional shaft-rudder combination of ships. Experts of shipbuilding and electrical engineering put their heads together – and the result was groundbreaking!

Before the Azipod® propulsion system, the power generated by the ship’s main engine was mechanically transferred to a propeller or as electricity to an electric motor placed inside the ship’s hull. The shaft was passed through a watertight sealed lead-through to the outside of the ship and a propeller was attached to its end. With a drive system of this kind, it was necessary to equip the ship with even several smaller auxiliary propellers and rudder devices for sufficiently precise steering. The systems were expensive, fragile and required a lot of maintenance. The challenges were in a class of their own with icebreakers because the conditions of the icy sea challenge both steering and the durability of the systems.

How does the Azipod® thruster work?

In the design, the entire propulsion device is free to rotate 360 degrees around its vertical axis, eliminating the need for traditional propeller shafts and rudder devices. The motor is located on the propeller shaft, so the rotation speed of the propeller can be continuously adjusted with a frequency converter. This means that the ship is easier to handle, and the system is also safer, quieter and more energy-efficient. 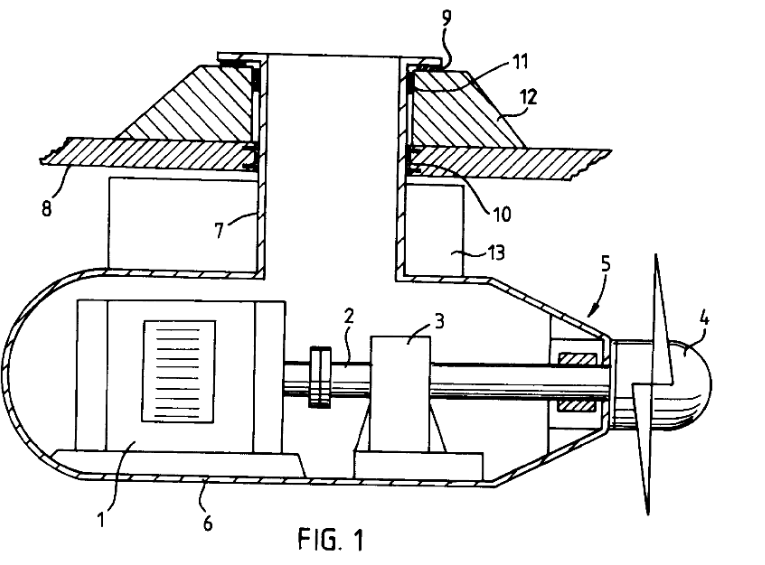 Illustration of the structure of the Azipod® thruster: A cylindrical “pod” (6) in which the electric motor (1) and shaft (2) rotating the propeller (4) are located and which is supported on the hull of the ship (8) with a rotating pipe shaft (7).

What are the most important features of the Azipod® product and where is it used?

A ship equipped with an Azipod® propulsion system saves up to 25% of fuel compared to traditional propellers. On a typical Baltic Sea ferry, the Azipod® thruster reduces carbon dioxide emissions by 10 000 tonnes per year. The system is thus significantly more environmentally friendly than many other propellers.

Development of the prototype began in 1989, and the first Azipod® thruster was installed on the Seili buoy-laying vessel of the Finnish Maritime Administration the following year. The prototype proved to be a success. Azimuth thrusters were initially installed on icebreakers and then on cruise ships. Azipod® propulsion is now the most common propeller drive system on both passenger cruise ships and high ice class vessels. The system is also used on various types of ferries, offshore vessels, luxury yachts, research vessels and many other types of ships.

How is the technology patented and what is the situation with the Azipod® trademark?

Kolster acted as ABB Strömberg Oy’s attorney when the Finnish patent application FI870670 was filed in 1987. The inventors were Kauko Järvinen and Ingmar Waltzer.

The basic patent covered virtually all possible implementations of the azimuth thruster. Only icebreakers were initially considered as significant applications and no wider patent protection was sought. Competitors also recognised the potential of the innovation almost immediately. The patent application advanced to the granting phase as early as in 1988, but competitors initiated opposition proceedings to prevent the patent from being granted. The opposition proceedings went through every instance of appeal all the way to the Supreme Administrative Court, and the patent FI76977 was not granted until ten years after the actual filing of the patent application. However, it had plenty of time to cause a headache for competitors before the term of the patent expired in 2007.

AZIPOD® is a registered trademark of ABB. Others would also like to use the name: attempts have been made to invalidate both the Finnish and the EU trademark, for example. The Finnish trademark remained in force by the decision of the Market Court after years of battle, but the invalidation of the EU trademark is still pending. Over the years, ABB has filed numerous patent applications related to the implementation of Azipod® propulsion system.

ALD technology – an invention in the pocket of every Finn
Atomic Layer Deposition (ALD) is one of the most significant and widely utilised Finnish technology inventions. Smartphones, which almost everyone carries in their pocket, would not be possible without the semiconductors enabled by ALD. The technology can be described as a multipurpose tool used in computers, LED lights and solar cells alike around the world.